Mike Nichols About The Author

Using a silo to store and dispense flowable bulk solids—such as powders, grains, granules, and other ingredients—is a highly efficient and effective way to hold a large volume of product in a minimal footprint. That’s because these cylindrical storage vessels often extend several stories high, maximizing use of a facility’s vertical space.

If the contents don’t flow out the bottom of the silo as expected, however, then a host of problems can arise. These include difficulties in accurately determining the amount of on-hand inventory, plus an increased risk of silo damage, potential production downtime, and more. Often flow problems can be attributed to the formation of a rat hole.

What’s a rat hole? It’s an open tunnel that forms in the middle product stored within a silo. Although one might resemble a rodent highway, no rats are involved in the formation of these tunnels (thankfully).

Instead, a rat hole results from what’s known as funnel flow within a silo. In a funnel flow pattern, the materials in the center, or core, of the silo discharge much faster than the materials resting closer to the sides. This ultimately results in an open tunnel—top to bottom—through the material, surrounded by buildup of the product on the sidewalls.

While there are advantages to funnel flow discharge patterns, for certain industries such as food manufacturing, they can be problematic. For example, in a food plant manufacturing a flour-based product, like crackers, breads, or pasta, it is important that the silo be designed to promote mass flow. In a mass flow pattern, all the stored contents move down the silo as a unified column, discharging in a first-in/first-out (FIFO) flow sequence.

Because flour is perishable, it’s critical that the “oldest” layer of flour in the silo—presumably the bottom layer that was loaded in on the oldest calendar date—be dispensed first. This FI/FO flow ensures that any insect larvae that may be in the flour do not have time to mature and infest the product prior to use, minimizing waste and maintaining proper hygienic conditions in the production facility.

How to Prevent Rat Holes

When working with the supplier of the bulk powder storage silo, it’s important that their engineering team understand the properties of the materials to be stored within it. The silo is designed to optimize the flow of the material in it, specific to the manufacturing process and desired production speeds.

Selecting interior liner materials that generate a low coefficient of friction encourages the flour to slide downward. Further, the silo’s funnel will be designed with an optimized discharge angle. Silos are also equipped with a motor-driven vibration system—called a bin activator—positioned at the bottom. This mechanical device gently vibrates the silo’s product dispensing column to promote continuous mass flow of the contents. The settings of the vibration unit are typically adjusted by the supplier to create a mass flow.

Determining the optimal on/off vibration cycle timing is based on a variety of factors. These include the flow characteristics of the product itself, desired discharge flow rate, how fast ingredients are being discharged, the size and geometry of the silo, the amount of volume stored, and often the supplier’s own technical experience. When a rat hole occurs, it is often the result of the bin activator’s settings having been changed, often by an operator who is unaware of the potential impact.

What are the Signs of a Rat Hole?

Rat holes are often discovered when significant discrepancies appear when measuring the contents of the silo for inventory purposes. It’s important for an operation to know how much material is left in the silo after a given period of time so that it can be replenished. While the easiest way to determine this would be to install load cells on every silo, those are often cost prohibitive as they would need to weigh volumes that frequently exceed 10 tons.

As an alternative, most silo manufacturers install two separate systems to help an operation determine the remaining volume of contents. These include a series of level probes, an automated plumb bob (sometimes referred to as a “yo-yo”), or a radar probe.

Note, when using the “yo-yo” method, there is an accepted degree of variability. That’s because the flow properties of different bulk solids are different. Some materials form a relatively level surface; others are more inclined to form a mound called an angle of repose. To continue with the flour example, it’s generally understood that using this method of measurement has a standard variability of +/- 1,000 to 5,000 pounds. However, at the volumes typically handled, that’s considered an acceptable range.

The disparity in the readings from these two methods of measurement can be an indication that a rat hole is formed. When an automated plumb bob’s sensor passes unimpeded through a rat hole, its travel distance measurement will suggest an empty silo. Yet the level probes will still be covered by product that is compacted against the sidewalls.

This results in an inaccurate measurement of the remaining inventory. When attempting to refill to the indicated volume, the silo won’t be able to hold those contents. This can cause the material to overflow and create an expensive, wasteful mess and downtime.

To verify the presence of a rat hole, a visual inspection must occur. This requires a qualified service technician to access the silo from the top, via one of its access hatches. With experience, the hole becomes easy to spot—even in a dusty environment (see example photos). 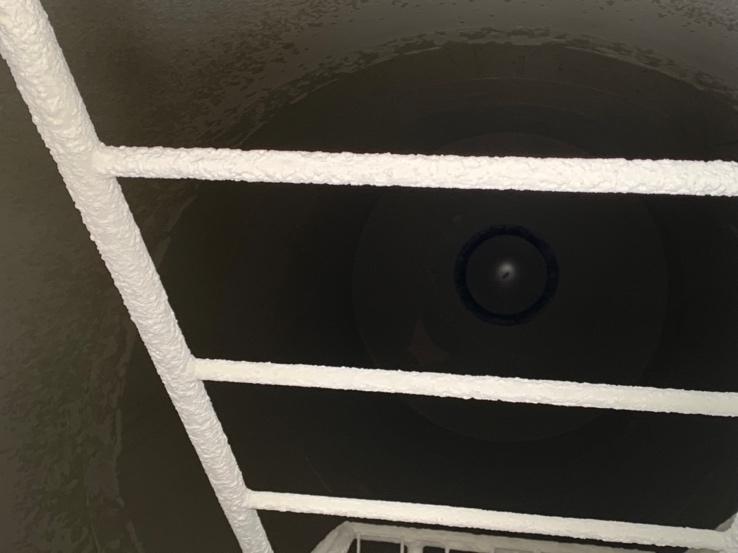 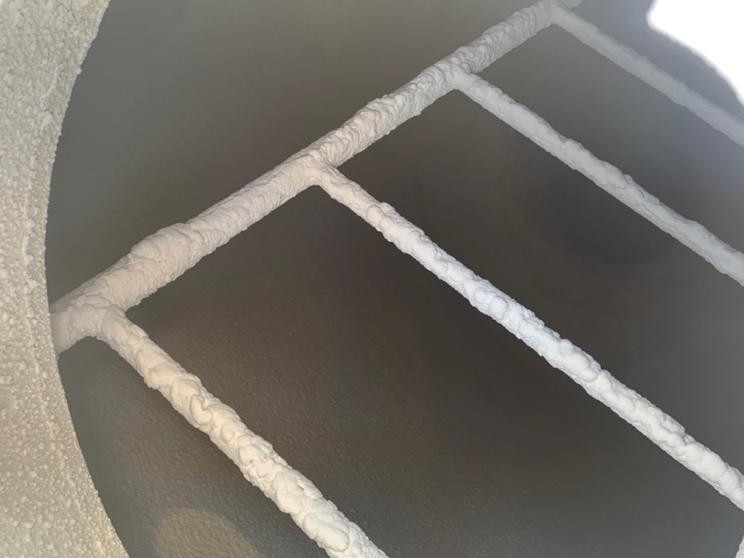 If a rat hole is discovered within a silo’s contents, it can usually be eliminated by returning the bin activator to its supplier’s original settings. Once the rate and frequency of vibrations are restored to the optimal cycle, the materials will typically loosen from the sidewalls and mass flow will be restored. It is, therefore, important to ensure that operators are trained to not make changes to the vibration equipment in order to avoid this occurrence.

Have a situation that calls for expert troubleshooting and service? AZO’s network of service and support professionals are located throughout North America, as well as in our home office. They are available by phone for remote assistance with issues such as these around the clock, and emergency repairs.

For more information about how AZO can help you properly maintain your bulk flow material handling silos, contact info-azo-usa@azo.com or call 901-794-9480.

Writing and research by: