There are several important factors to consider when choosing screening equipment. Many in the ingredient handling world either have a background in utilizing deck-style screening or cyclone-style (centrifugal) screening. Still, not everyone in these positions know why they might choose one over the other for their operation.

There are indeed distinct differences between these two categories of screening equipment: cyclone screeners feed product through the use of centrifugal force. “Beater bars” move product around inside the screen of a cyclone screener. Deck screeners include a screening drive and a frame that holds a screen cloth while material travels from the feed end to the discharge end of the device.

An AZO cyclone screener being utilized for safety screening

Deck and cyclone screeners can be operated using gravity or, in some cases, by placing an inline vacuum in a pneumatic conveying system. Typically, using gravity does offer higher throughput. When designing a conveying system, it is also critical to take into account the inline pressure drop and a required increase in energy. Using a sifter will plug a conveying line much like a seed stuck in a straw if not properly designed (AZO specifically implements a vacuum switch in the line to avoid this). It requires more effort to move product through at the same rate. If you’re placing either style of screener in-line, you have to design an entire vacuum system differently than when utilizing gravity.

While it’s no secret that AZO’s work originates in cyclone screeners, we know there are considerations for either sifting style to keep in mind based on the process and application. In this post, we’ll sift through the benefits of both deck and centrifugal screening. We’ll also shed some light on why much of our work focuses on cyclone screening at AZO. 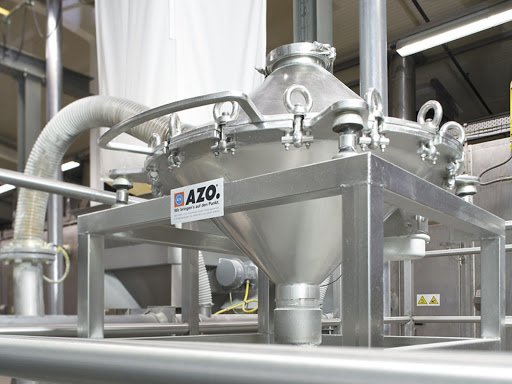 Though AZO primarily manufacturers centrifugal screening machines, we do offer the TW650 flat deck screener. In the case of single-cut screens, we also can provide flat deck single-cut scalping screens for use with bag tipping stations.

A deck screener can make multiple cuts and classify particles into a few different sizes. This is the primary advantage that a deck screener could have over a centrifugal sifter if an operation calls for that function. You also can’t classify (separating material by size) with a single-cut centrifugal screener, but it is possible to add decks to a flat deck screen for this purpose.

What some call classifying, or grading, has the advantage of performing two functions:

Centrifugal screeners give you the ability to clean the screen and the unit itself without the use of tools. Specifically, with AZO’s DA and E-style screening devices, entire screen baskets can extend once the end bell is removed. While there are some deck screeners that also do not require tools, some have locked doors that require removal before the screens can slide out of the unit.

Most deck screeners also require guards around the shaking sifter to prevent operators from making contact with it. These guards are implemented to prevent injury-prone situations, but centrifugal sifters do not require such protection. Opting for a cyclone screener could represent one less purchase at the cost of an operation or plant, especially since deck sifters’ safety gates are often sold separately from the sifter itself. More costs can certainly be added in the event that an injury does occur through the use of a deck screener that does not have a safety gate equipped.

Following any type of injury with any piece of equipment, significant increases in workers’ compensation can also have a substantial impact on a plant’s bottom line. Reputational damage also tends to follow unfortunate workplace incidents (whether or not the company was at fault). Whichever screener-type you decide to incorporate into your systems, maintaining a company culture around great maintenance and safety regarding material handling can help diminish risks related to workplace injury and product contamination.

The dosing screw of an AZO DA model Screener

Deck sifters don’t always deagglomerate small and soft lumps in material, a process that centrifugal screeners have the ability to accomplish (so long as said material is appropriate for the screener). While equipment like delumpers are necessary to take care of especially hard or abrasive material, cyclone screeners are able to break apart material that a human hand can also condition (but on an automated scale). Centrifugal screeners are often used near the end of a process (before packaging) for this reason.

Still, it is critical to not segregate the materials during final conditioning. Caution should be taken to not separate the heavier particles from lighter particles, essentially undoing a mix or blend.

AZO consolidates metering and screening with the DA model

The AZO DA screener model offers both screening and controlled metering in the same machine. Its robust design includes extractable slide rails that make changeovers easy. Little effort is required to change a screen or inspect the screw and rotor in the DA model. This is due to its special extraction device and quick disconnects.

An AZO DA model Screener with its slide rails extracted

The DA is also a “low-profile” screening device, perfect for buildings with height restrictions. In addition, it has benefits in regards to sanitation as all of the DA’s components extract from the chamber, which allows for easy access to its surfaces.

As the founder of AZO was the inventor of the first cyclone screener on the market, we’ve had experience in this industry since 1949. Clients often come back to us with special requests and our sifting equipment has a high-quality robust design. If you have any questions about cyclone screening equipment or ingredient automation as a whole, please contact our sales team. Our screening buying guide can also help you specify, justify or maintain the right screener for your operation.