This Is How a Cyclone Screener Conditions Bulk Material

Though a cyclone screener’s main purpose is to prevent foreign material in bulk solids from entering production, another desired task is “deagglomeration” — the process of breaking up material that is clustered together.

While we’ve already outlined the methods that other specialized equipment use to condition material, many machines can be comparatively more expensive than a cyclone screener. Screeners have the ability to condition material (so long as said material is appropriate for the screener). There are added advantages to using a screener to condition certain materials, factors for choosing the best screener fit for specific operations, and maintenance requirements for any robust screening device. We’ll outline these topics moving forward on this page:

Not often are screeners purchased for the sole purpose of conditioning material. Screeners are particularly useful in gently breaking apart small and soft lumps. While it’s true that especially hard or abrasive material can damage the screen basket, investing in equipment (such as a delumper) to take care of soft lumps and clumps that aren’t abrasive becomes a capital intensive effort. Why overdo an operation? Using a screener to break apart the appropriate material saves money and energy.

As a rule of thumb, if you are able to break apart material in your hand by massaging clumps together, a cyclone screener is likely to accomplish the conditioning required for the material. More advanced product testing can be done to determine if material pushes the envelope of a screener’s conditioning ability.

AZO specifically offers testing at our in-house lab (The Thorp Callaway Ingredient Automation Test Facility) for ingredients to determine if material will be easy to handle in a pneumatic conveying system. This is especially recommended when determining whether ingredients are fragile or friable. You’re welcome to view tests in person, or videos can be sent demonstrating how they’re conducted.

Advantage Of Conditioning With A Cyclone Screener

An additional benefit to utilizing a cyclone screening for conditioning small lumps and clumps is multitasking — screeners break apart this material and keep foreign material out of your system simultaneously.

For example, when handling corn starch, lumps and clumps are likely to accumulate. This is especially true if the moisture content is high. In this situation you wouldn’t necessarily need a delumper because a screener could take care of this process while accomplishing the removal of foreign materials at the same time. 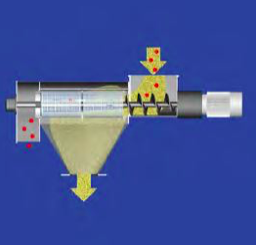 A standard pass-through screener will be required to screen at a certain speed to operate it’s screening function at all. If you try to slow the single shaft down, you're going to slow the screener down and then you won't accomplish any screening whatsoever. Essentially, a pass-through screener operates at one speed while a dosing screener (such as AZO’s DA Screener model) contains both a screening chamber and a separate screw, which can operate at their own respective speeds. 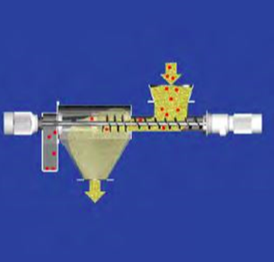 In this way dosing screeners also take up less room in a low-profile plant. Instead of requiring both a feeding device and a screener to be installed under your bulk bag unloader, you can save height by using one piece of equipment — a consolidated dosing screener.

While the consolidation of these machines can come at a slight price as far as capital equipment costs are concerned, the value of investing in a dosing screener extends to some other key advantages. If your feeding device breaks down on a non-dosing screener, it can get more complicated from a maintenance and operations perspective to find a solution.

With a dosing screener you would only have one piece of machinery that spare parts are kept for, one set of records, and one manufacturer to call for the replacement of these spare parts. Over time the total cost of ownership can make it less desirable to invest in a pass-through screener as opposed to a dosing screener, but both options have distinct advantages depending on your operation.

For any type of screener maintenance is critical for operation, and accomplishing this process is process and product-specific. Cleaning the screener unit is typically set up by a plant’s production schedule, but AZO recommends the screening equipment should be dry-cleaned cleaned annually for most processes.

Specifically, an AZO E model (left) has easy-inspection door which can be opened with two handles. You can then spin the screen around to observe the screen. The self-dosing DA model (right) contains quick-clamps that allow an operator to remove the screw and beater bars.

An AZO TW Screener is not self-cleaning, should be inspected after every unloading event and utilizes stainless steel laser cut screens that are long-lasting.

Did you know that AZO launched the first cyclone screener on the market in 1952? AZO Inc. has a long history of bringing robust and heavy duty screeners to North America that are based on the founding ideas that made this machine a success in Germany. Contact our sales engineers to learn more about our years of experience in tackling various plant process challenges you may have.